"Eternal Harvest: The Legacy of American Bombs in Laos" 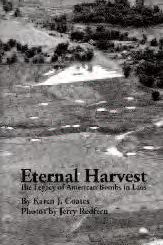 "Eternal Harvest: The Legacy of American Bombs in Laos"

Although not an environmental book per se, “Eternal Harvest: The Legacy of American Bombs in Laos” is a great piece of journalism that environmental writers can use to rethink issues such as land use, chemical contamination and public safety.

It deftly combines an utterly fascinating narrative written by Karen Coates with mind-bending black-and-white photographs from Jerry Redfern for a package guaranteed to stick with you, whether or not you’re a human rights advocate or someone mildly intrigued by the human condition elsewhere in the world.

Laos is the most heavily bombed nation on Earth, a country bombed once every eight minutes on average over a nine-year period from the late 1960s into the early 1970s, according to the authors.

Forty years later, the bombs remain one of the greatest threats to public safety and traditional farming. Tons of steel shrapnel and unexploded bombs still litter the landscape. More than 20,000 deaths and injuries are believed to have occurred there since the U.S. bombing stopped, mostly from unexploded ordnance going off.

Coates and Redfern, who have spent years working together in Southeast Asia, demonstrate an obvious comfort level, not only in their understanding of declassified information about the bombing campaigns in Laos during the Vietnam War – a legacy the United States government suppressed for years – but also in how the mostly agricultural-based country has been upended.

It’s nothing, for example, to see children attempting to detonate bombs, farmers with missing limbs, and hunks of steel from bombs made into ash trays and lamps. In fact, Laos received its most steel imports from the bombing.

The couple made its first visit to Laos in 2005, ironically, while researching an article about the Plain of Jars for Archaeology. The Plain of Jars is one of the most fascinating areas of Laos, one in which hundreds of mysterious stone burial vessels exist. That trip resulted in their continued research of Laos and the bombing legacy.

This book is a great example of how mankind can grossly impair, if not forever ruin, the way of life for a whole culture. It’s a reminder of how pollution can be found in unconventional forms.

Read our interview with the authors in Between the Lines, here. And visit their web site.