Beyond Fracking — Covering Injection Wells in Your State

TipSheet: Beyond Fracking — Covering Injection Wells in Your State

Some 90 million U.S. residents rely on groundwater for their drinking water. Protecting its purity is one important purpose of the Safe Drinking Water Act. And because it is often a localized resource, it makes for great local stories.
Here’s one example: Many dangerous waste liquids are deliberately pumped into deep wells as a means of disposal — a practice called underground injection. When done right, it can be safe. When done wrong, it can be disastrous.
That’s why the Safe Drinking Water Act has an important section that is supposed to protect drinking water from underground injection — the Underground Injection Control Program (42 USC 300h,  see page 996). With it, SDWA requires states to set up underground injection control programs — but also gives the U.S. Environmental Protection Agency authority to regulate state programs and take over when they fail. Like many other environmental laws, SDWA recognizes that sometimes states do the bidding of politically powerful industries rather than protecting the public.
You might be thinking fracking. It’s true that fracking for oil and gas involves injecting liquids into underground formations under high pressure, and often the wastewater from fracking is disposed of by pumping it back underground. Regulation of these operations (at least on non-federal lands) is left to the states, which sometimes are lax. But while some oil and gas operations are subject to UIC rules, fracking itself is exempt from SDWA UIC requirements unless the fracking fluid includes diesel oil.
The point: fracking may be newsy — but there are additional stories to be found on other kinds of injection wells. Shining a light on this "out of sight, out of mind" syndrome might yield you stories. 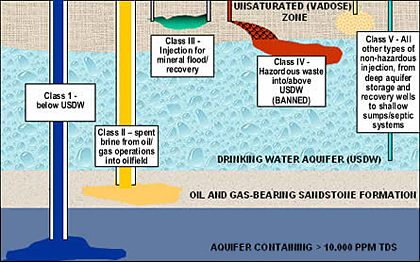 First, keep in mind a few things: Most drinking water aquifers occur at fairly shallow depths, while many waste disposal injection wells go into far deeper formations. But remember also that a shallow drinking-water aquifer can be polluted when well-casings going to deeper formations fail (and they do). So, ideally, the receiving formations should be well isolated from drinking-water aquifers by multiple impermeable geologic layers.
SDWA actually regulates six classes of injection wells. Under SDWA, most dangerous (e.g., Class I) injection wells must have permits (some issued by the state, and some by EPA). Permits are public documents, which gives journalists a handle for reporting. Here is an example of what a permit looks like.
Not all injection wells are required to have permits. Some are under “general permits” (which allow all wells of a certain kind) or are "authorized by rule." Even in those cases, however, there are often public documents which reporters can use to gather information.
One type of well worth attention is Class V. These are wells used to dispose of "non-hazardous" fluids into or above an underground source of drinking water. Examples include septic system leach fields, and stormwater and agricultural drainage wells. EPA estimates that there are more than 650,000 of these nationwide. In some cases these wells actually help recharge aquifers.
Here's another angle. One class of UIC wells may actually do some environmental good — or so it may be argued if the well is used for carbon sequestration. Those are Class VI wells. These wells have their own environmental issues (e.g., carbon dioxide in the presence of water produces carbonic acid, which may corrode pipes). Are there any Class VI wells in your area?
Here is a good list of state drinking water agencies to get you started.