A cool breeze carried thousands of runners toward me, a stream of humanity from 92 countries. Thousands more spectators packed the sidewalks, ringing bells, hugging friends, high-fiving strangers in their final stretch of the race.

Although I’d been a reporter for the Boston Globe for over twelve years, I didn’t have the right credentials to be where I was standing, since I was currently on leave from the paper while completing a year-long Nieman Fellowship in Journalism at Harvard University. But I had pleaded my case to a marathon official, who believed my improbable story.

I was there, I had told him, to complete my first short film — the culminating project of my fellowship — about a unique runner who was about to make history by becoming the first little person to complete the Boston Marathon.

The subject of my film was less than a mile away as I fidgeted with a video camera that I was still learning to use, trying to figure out how to control the exposure as the sun kept shifting from in and out of the clouds.

And then, in a moment that I will carry with me for the rest of my life, I felt the street shudder.

At newspaper, first experiments with video

It wasn’t until after college that I thought I might become a journalist.

A post-graduate vagabond searching for an identity, I moved to Chicago for a master’s program in journalism at Northwestern University, after which I freelanced for some time, reporting from Mexico and eventually Cuba as a stringer for the Boston Globe, Miami Herald, San Francisco Chronicle and other papers.

I pushed my luck, writing increasingly critical stories that began to rankle Cuban authorities, and eventually they had enough and decided to deport me.

Then in 1999, the Boston Globe asked if I would move to Boston. It was an opportunity to have some financial stability after years of freelancing and I was eager to work for a storied paper.

As the newspaper became more of a

multimedia operation, I was encouraged to

experiment with shooting video for my stories.

As the newspaper became more of a multimedia operation, I was encouraged to experiment with shooting video for my stories.

At first, I was given something called a Flip cam, a pocket-sized camera with a minuscule screen. You had to get close to the subjects, and the images and audio were awful, but it was enough to get a sense of the power of video, the emotion that could come through and how it could supplement what I was trying to do as a writer.

One day, a new breed of employee at the paper — someone called a video journalist — accompanied me on a story about so-called live-aboards — hearty, often impoverished folks who lived in the cabins of shrink-wrapped boats that remained on Boston Harbor through the winter.

Afterward, I noticed the footage did something I could only hint at in print. It captured the howling sound of the winds as they rustled the plastic covering the boats, the dismal light and cramped space that many of the people inhabited, the chilled condensation of their breath as they exhaled.

Later, I wrote a story about a group of teenagers living in tents beneath a bridge in Boston. As one of them showed me the plastic trash bag where he kept a blazer and collared shirt he used for job interviews, I thought to take out my camera on a primitive cell phone.

The sadness of that one scene, of a 17-year-old showing me how he tried to keep up appearances while living in such desolate conditions, lasted for me. It reflected, again, the power of film, and how it complemented what I was trying to do in my narrative writing.

Then in 2012, I was lucky enough to be selected for the Nieman, where I could spend a year studying whatever I wanted at Harvard.

One of the classes I sought out was an introduction to making films. But such classes were usually oversubscribed and reserved for students. I pleaded with the professor, an acclaimed documentarian named Ross McElwee, to give me a chance. In the end, someone dropped off the waitlist and I got lucky.

As the semester wore on, my lack of skill with a camera became increasingly evident. I would forget to turn off the timecode, and my lack of ability to focus properly made my images soft and grainy.

For the final project, I began following Juli Windsor, a young woman who hoped to be the first little person to finish the Boston Marathon. I spent months filming her as she trained and examined patients as a physician’s assistant. On Marathon Monday, which we call Patriot’s Day in Boston, I went to her apartment before dawn and filmed as she prepared for the big race.

I took the bus out with her to the starting line, where I filmed her as she began the long run back to Boston. Afterward, I met her at the halfway point, and then I went to meet her at the finish line.

It was a crisp, cloudy day — ideal conditions for a marathon. Long after the elite athletes had finished, it was the runners for charity now slogging to their triumphant end. Still, the crowd on each side of Boylston Street was roaring, as if each runner was about to win an Olympic medal.

It was then that I felt the street shudder.

Out of the corner of my right eye, I saw a flash of light and a cloud of smoke erupt less than 20 steps from where I was standing. I smelled sulfur in the air and a shock wave pushed me back several steps.

About 12 seconds later, as I struggled to make sense of the growing pandemonium, I heard another blast, and it became clear what happened, just as it was clear for anyone who watched the second plane hit the second tower on Sept. 11, 2001.

The attack killed three people, including an 8-year-old boy, whose family’s story I spent six months chronicling for the paper. The bombs left more than 250 others injured, including 17 people who lost limbs.

That day, I remained along the finish line and

filmed the awful aftermath. … The footage was

That day, I remained along the finish line and filmed the awful aftermath until the FBI rolled in and cleared the area. The footage was broadcast online, viewed by millions of people.

Over the next few weeks, I had to relive the horror again as I edited a very different ending than I expected for the film, which I called “25.7: In Twice the Steps,” for the mile marker where Juli was stopped with thousands of other runners.

But the ending was wrong, so I continued to film Juli over the next year, eventually running beside her with a camera and finishing the race together. That film, which I called “Undaunted,” was broadcast on the BBC World News, appearing in nearly every country around the world.

Return to environmental coverage, but with a camera

The Marathon bombings had occurred in the last weeks of my Nieman fellowship. After spending a year writing about the aftermath of the attack for the Globe, I resumed covering the environment, a beat I took on before the fellowship. It was around then that I began to understand how climate change was affecting our oceans, and I’ve made four films about the environment since.

Shortly after returning to the Globe, I began looking at making a new film with two colleagues, one a cinematographer and the other an editor. We decided to examine a subject I had already been writing about, the collapse of the iconic cod industry in New England — America’s oldest fishery.

For this film, we worked with a great cinematographer who shot the entire film, and I reported it and orchestrated most of it. After a year and half of work, “Sacred Cod” was broadcast around the world on the Discovery Channel.

After that, in 2016, I spent a semester as a visiting Knight chair in journalism at the University of Miami, where I directed an award-winning film called "Gladesmen: The Last of the Sawgrass Cowboys."

The feature-length film is about the government's $16 billion effort to restore the Everglades, one of the planet's most damaged ecosystems. It's told through a group of men and women called Gladesmen, who worried they were losing their way of life.

In 2017, I made a film about a climate-fueled conflict between the United States and Canada over waters that both countries have claimed in the Gulf of Maine since the end of the Revolutionary War.

That film, called "Lobster War: The Fight Over the World's Richest Fishing Grounds," premiered at the International Maritime Film Festival in the fall of 2018, where a jury selected it as the runner-up for the grand prize for Best Feature Film. It was also featured at scores of independent theaters and film festivals, including the 2018 Mystic Film Festival, where it won an award for Best New England Film.

My most recent film is about how climate change has accelerated a collision between one of the world’s most endangered species, North America’s most valuable fishery and a federal agency mandated to protect both.

The film, titled "Entangled," chronicles the efforts to protect North Atlantic right whales from extinction, the impacts of those efforts on the lobster industry and how NOAA has struggled to balance all the vying interests.

The film, which was backed by the Pulitzer Center and the LEF Foundation, premiered at the Woods Hole Film Festival this past summer and recently won a Jackson Wild award, known as the Oscars of nature films.

For my most recent films, I’ve collaborated with Andy Laub, a former student of mine when I taught at Emerson College in Boston. He’s an amazing editor and cinematographer, and we’ve worked closely since “Undaunted.”

I still like to do all the filmmaking functions — shooting, sound, editing, writing — but for these three most recent films I’ve worked every step of the way with Andy.

And while my interest in filmmaking was originally motivated by my journalism, for the most part I now mainly separate my film work from my duties at the Boston Globe, a kind of moonlighting. The Globe has provided in-kind support for my films, for which I’m deeply grateful.

At times, when I’m reporting a story for the paper

that may be relevant to a film, or vice versa, I’ll

shoot video and rely on that footage for what I write.

The footage is usually far better than my notes.

That said, at times, when I’m reporting a story for the paper that may be relevant to a film, or vice versa, I’ll shoot video and rely on that footage for what I write. The footage is usually far better than my notes.

Working for the paper, I have the benefit of reporting every day in a deep way and being able to produce stories quickly that have impact. But the films have allowed me to spend more time on a story, delve more deeply, stitching much of my day-to-day reporting into broader narratives.

So as the print and visual worlds continue to converge online, I remain fulfilled wearing two hats. It’s a way of working I hope to be able to continue. 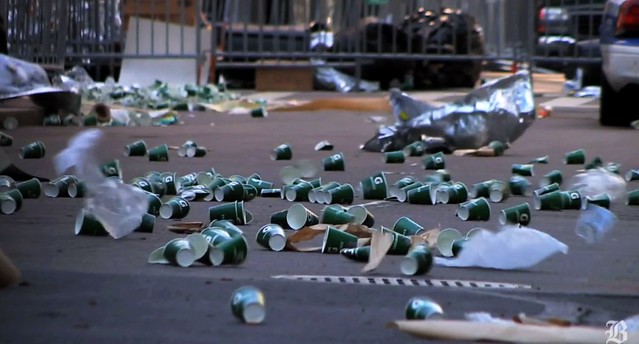 David Abel, a documentary filmmaker and occasional professor of journalism, has been an award-winning reporter for the Boston Globe since 1999. He has covered war in the Balkans, unrest in Latin America, national security issues in Washington D.C., terrorism in New York and Boston, and climate change and poverty in New England. He now covers the environment for the Globe. Abel was part of the team that won the 2014 Pulitzer Prize for Breaking News for the paper’s coverage of the Boston Marathon bombings.