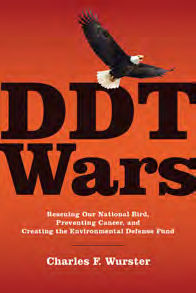 In April of 1963, Charles Wurster and a small group of fellow scientists decided they would monitor a planned DDT spraying in Hanover, N.H. They hadn’t read Rachel Carson’s “Silent Spring,” published the year before; nor had they looked at much of the scientific literature.

“We were unbiased and empty-headed,” Wurster recalls in a compelling new memoir, “DDT Wars,” about the early days of the Environmental Defense Fund and the fight to ban most uses of persistent organic pollutants such as DDT.

With a Ph.D. in organic chemistry, Wurster was an assistant professor teaching at Dartmouth when the spraying started.

Town officials were spraying DDT in the hope of eradicating Dutch elm disease, and Wurster expected a few dead birds the day after the spraying. Instead, people brought in dying birds for weeks as the poison slowly worked its way up the food chain.

Each bird that came to his lab had lethal concentrations of DDT in its brain.

“We had rediscovered what other ornithologists had already reported from DDT spray programs in the American Midwest,” Wurster writes. “Hundreds of towns were killing thousands or millions of birds while not protecting their elms. The whole thing struck me as absurd and tragic.”

Wurster kept thinking about what to do as he took a new job at the State University of New York at Stony Brook, Long Island.

At the time, DDT and similar chlorinated hydrocarbons had attained a symbolic status as a miracle of science, despite being ineffective in many applications, and also despite the serious collateral damage described in “Silent Spring” and many scientific studies.

But big agriculture and chemical industries embraced the symbolism, and some ultra-conservatives have continued to uncritically defend it, even to the point of accusing environmentalists of human genocide in recent years. That’s why an inside account of the early days of activism around pesticides is so important today.

For Wurster and others, law and science law turned out to be a potent combination, far more effective than the usual round of letters, petitions, hearings and appeals.

On Oct 6, 1967, incorporation papers were signed for the Environmental Defense Fund.

EDF is important because it pioneered the use of environmental law, an approach that has been used in other nations and by other groups, such as Earthjustice and the Natural Resources Defense Council. It’s an important theme in environmental history.

Although “DDT Wars” does not address some of the relatively recent criticism about the group, it is a valuable memoir. The story of the formation of the EDF and the fight to ban indiscriminate uses of DDT underscores the pressing need to preserve the documentation and oral histories of the entire environmental movement.

Bill Kovarik is a professor of communication at Radford University in Radford, Va., where he teaches media history, media law and journalism. He also curates the web publication environmentalhistory.org.