"The Bet: Paul Ehrlich, Julian Simon, and Our Gamble over Earth’s Future" 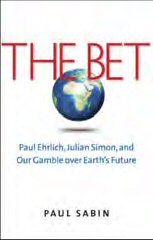 "The Bet: Paul Ehrlich, Julian Simon, and Our Gamble over Earth’s Future"

In the fall of 1990, economist Julian Simon received a check for $576.07 in the mail, along with a sheet of metal prices. The check was from Stanford University biologist Paul Ehrlich. There was no note enclosed.

A decade earlier, Simon and Ehrlich had made a bet on whether the prices of five metals (chromium, copper, nickel, tin, and tungsten) would rise or fall in 10 years.

Ehrlich, who believed that human population growth would soon exhaust Earth’s resources, predicted that the metals would cost more as they became scarcer.

Simon, who argued that human ingenuity would lead to the discovery of new sources and new production methods, predicted that the metals would become cheaper.

In “The Bet,” Yale historian Paul Sabin recounts the story of Ehrlich and Simon’s wager, which pitted Ehrlich’s belief that humans were exhausting the planet’s resources against Simon’s view that markets, technological innovation and human ingenuity were creating a better future.

As Sabin sees it, both men had valid points. But, he wrote, their winner-take-all approach “shows how intelligent people are drawn to vilify their opponents and to reduce the issues that they care about to stark and divisive terms.”

Much of “The Bet” traces Ehrlich’s and Simon’s career paths to place their standoff in context.

Ehrlich is a distinguished scientist, famous for his controversial, yet wildly popular 1968 book about spiraling human growth, “The Population Bomb”, which he co-authored with his wife, Anne. In that book and others since, Ehrlich argued that human societies were pushing up against biological and physical limits, and called for aggressive government action to limit population growth.

Ehrlich’s views were firmly rooted in the tradition of Thomas Malthus, the 18th Century English scholar who warned that population growth would outstrip food supplies and lead to starvation.

Ehrlich also worried about traditional environmental issues such as fossil fuel consumption, industrial pollution and toxic wastes. He served on the steering committee for the first Earth Day in 1970, and warned in Congressional testimony and media appearances that over-consumption was ushering in an “age of scarcity.”

Simon saw things differently: He was an advocate of free markets, trained at the University of Chicago, who believed that population growth could strengthen economies rather than weakening them. When resources grew scarce, he argued, people would innovate and find new solutions.

In the late 1970s, Simon started publicly criticizing Ehrlich and his colleagues. Ehrlich struck back and took up Simon’s bet. When Simon won, many commentators argued that apocalyptic environmental warnings were wrong.

Ehrlich refused to concede, saying that newer problems such as ozone depletion and climate change made a crash inevitable at some point, while Simon launched ever-broader attacks on “doomsaying environmentalists.”

They each proposed new bets on the future – Ehrlich wanted to focus on environmental indicators; Simon countered with measurements of human health and quality of life – but they never found common ground.

Ehrlich, now 81, is still a professor at Stanford and chair of the university’s Center for Conservation Biology.

This book shows how Simon and Ehrlich’s bet embodied ongoing debates about conservation and environmental regulation in America. Sabin tells the story fairly, without taking sides, and points out valuable insights that each perspective offers.

Ehrlich and other environmental scientists “helped avert genuine ecological disasters, and [showed] the risks of dangerous new technologies,” laying the groundwork for landmark environmental laws enacted in the 1970s, Sabin wrote. Simon and other economists showed that regulation imposed economic costs and that scarcity could trigger innovation.

Sabin also points out areas where each thinker got it wrong. Ehrlich’s apocalyptic predictions of famine helped tag environmentalists as gloom-and-doom prophets, while Simon put too much faith in free markets to solve humanity’s problems. Both men pushed their ideas too far, Sabin argues.

“The Bet” puts today’s climate change debates into context and connects many dots in the past 50 years of environmental thinking. It also shows the risks of framing these issues as either/or choices.

As Sabin puts it, “Our task is not to choose between these two competing perspectives but rather to find ways to wrestle with their tensions and uncertainties, and to take what each offers that is of value. . . . Neither biology nor economics can substitute for the deeper ethical question: What kind of world do we desire?”

Jennifer Weeks is a Boston-based freelance writer and a former member of SEJ’s board of directors.