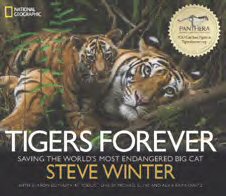 If you don’t hate wildlife poachers by the end of this book, you never will.

Yes, photographer Steve Winter captures the sheer awe, beauty and power of one of Earth’s most majestic creatures in “Tigers Forever: Saving the World’s Most Endangered Big Cat.” That’s an understatement.

But what adds to the book’s obvious visual appeal is how Winter and freelance writer Sharon Guynup, a longtime SEJ member, get to the heart of what all great journalism’s about: Why it matters.

Tigers matter. As Winter and Guynup point out, the collective actions to destroy tiger habitat and prey – but especially tigers themselves when people are motivated by black-market profiteers – say a lot about the human race and what it is willing to overlook or condone.

Readers learn that the battle is not so much being waged over an occasional killing of a nuisance tiger that has encroached upon a livestock farm, or because of cultural and religious traditions (including one infamous tourist attraction, Thailand’s Tiger Temple).

The biggest battle is being waged with a strong, organized, and brazen militia engaged in ongoing jungle warfare with conservation officers. The authors take readers into the middle of that. They highlight the extreme dedication of many conservation officers willing to put their lives on the line, often for much lower salaries than what poachers get from their crime bosses.

Fewer than 3,200 tigers remain in the wild, down from 100,000 a century ago. They are coveted for their skin and bones, the latter of which is used in some reputed healthcare products. Tigers face threats from climate change and other environmental issues just like other iconic species, such as the polar bear.

The plight of tigers, though, is not nearly as complex. With a stronger crackdown on poaching, the authors claim, most of the problem could be solved. It’s mostly a matter of political will.

Winter, an award-winning National Geographic photographer who has focused on telling the stories of big cats for much of his career, offers a nearly groundbreaking look at tigers with close-ups in the wild.

Many images were taken remotely from cameras set up at fixed locations, some with infrared light and some with mobile robotic devices. On several occasions, Winter photographed from atop an elephant taxi. In India, he was granted access to off-limit sites under guarded escort by government officials. His photographs come from Myanmar, Kaziranga, Sumatra, Thailand and India.

Vignettes are included of prominent tiger conservationists, including biologist George Schaller, but also a number of on-theground conservation officers, activists and others who make a difference daily in those parts of the world.

The book was done in partnership with Panthera, a global group striving to save big cats. A portion of the proceeds goes to that group’s Tigers Forever program. Alan Rabinowitz, Panthera chief executive officer, wrote one of the introductions.

While a lot of thought and commitment obviously went into the book’s physical characteristics – it’s a big, wide, and heavy book readers can spread across their laps, and the paper stock is among the thickest and most impressive they’ll find – to call “Tigers Forever” a coffee-table book would be wrong. It is a clarion call for justice with striking photographs – some truly mesmerizing – that serve the National Geographic brand proud.

Tom Henry is The (Toledo) Blade’s environmental writer, SEJournal’s book editor, a member of the magazine’s editorial board, and a former member of SEJ’s board of directors.