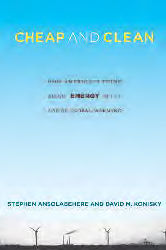 How do Americans think about energy choices?

What kinds of new power plants and delivery systems are the public likely to accept, and what types and levels of risk will consumers tolerate in return for reliable energy supplies?

These questions loom especially large now, as dozens of older coal-fired power plants shut down nationwide and we consider how to replace them.

Should we frack for more oil and gas? Extend the operating licenses for more nuclear plants? Build more utility-scale wind and solar farms?

Every choice has its advocates and its downsides.

Political scientists Stephen Ansolabehere of Harvard University and David Konisky of Georgetown University conducted a series of surveys measuring U.S. views about energy over the past decade. They found that Americans consider two issues when they think about energy: price and harm.

Ideally, we want fuels that are both cheap and clean – i.e., that have low prices and cause low levels of all kinds of harm, including health, environment and security impacts. In practice, we trade those two goals off against each other.

In this book, Ansolabehere and Konisky argue that public perceptions of the costs and harms of different fuels are the most important drivers of American energy choices.

This finding was supported by a recent University of Michigan poll that found almost no regional difference in views about how energy affects the environment.

The authors conclude that Americans perceive the costs and harms of different energy sources fairly accurately. They understand that coal and gas are cheaper than oil and nuclear power, although many people believe (wrongly) that wind and solar are cheap energy sources.

Americans typically perceive coal and oil as having the most harmful impacts on the environment, and renewable sources such as solar and wind energy as posing the smallest environmental harms, with natural gas somewhere in the middle. Although nuclear power produces few harmful emissions from electricity generation, many Americans view it as very unsafe because of the risk of catastrophic accidents.

Ansolabehere and Konisky found that when Americans think about harm to the environment from energy use, they care most about local impacts such as air and water pollution, waste dumps and spent nuclear fuel storage at reactors.

Climate change is a secondary issue in most people’s minds and doesn’t have much influence on general public views about energy.

“Most Americans express concern over climate change and say that some steps should be taken now to address the matter,” the authors write. “At the same time, most Americans are also unwilling to spend more than a few dollars more on each month’s electricity bill even ‘if it solved global warming.’ We are of two minds – concerned with and aware of the problem, but unwilling or unable to act.”

The authors find that Americans want to use more renewable energy and less coal and oil, but don’t expect the energy system of the future to actually look much different from what we have now. In other words, they don’t trust energy companies or government to move to cleaner fuels. Moreover, almost no one supports President Obama’s “all of the above” strategy: only 3 or 4 percent of Americans think we should use more of all fuels.

To make progress on climate change, Ansolabehere and Konisky recommend policymakers to focus on strategies that produce major local and regional environmental benefits, such as cutting coal-burning power plant emissions, instead of focusing primarily on carbon emissions.

A bumper sticker for their approach might read “It’s the soot, stupid.” Regulating harmful pollutants such as sulfur, mercury and particulates that have high social costs will also make fossil fuels more expensive.

In the long term, the authors contend, this approach could make renewables more competitive, and provide Americans with energy that is truly cheap and clean.