"The Science Beneath the Surface: A Very Short Guide to the Marcellus Shale" 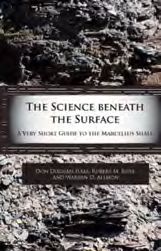 "The Science Beneath the Surface: A Very Short Guide to the Marcellus Shale"

If you are looking for a quick reference to shale, this is it.

“The Science Beneath the Surface” presents information about the geology of shale as well as that of drilling, water, risk and climate change in language the average reader can understand in a non-partisan way.

One point the authors make is there are still significant gaps in basic knowledge, and there are significant disagreements about how to interpret data about gas extraction from Marcellus shale.

The biggest challenge: combing through the vast amount of information and wrestling it into one thin volume. While shale science is grounded in geology, research on gas extraction includes environmental studies, land use, agriculture, water, air, human health, engineering – each of which could demand an entire book.

The authors look at the geology of Marcellus shale and the deposition of marine life that, upon decomposition, produced the methane and other hydrocarbons trapped in the rock.

This is not permeable stone; to release the gas you need to break the rock apart.

Besides discussing the geology and natural fracturing of the formation, they get into math: How much gas is trapped in the shale?

Those estimates, ranging from a high of 516 trillion cubic feet, or tcf, to 85 tcf, lie at the heart of some arguments about whether drilling is viable, especially given costs to comply with environmental regulations.

Geology matters. The properties of the sediments deposited 390 million years ago affect how that gas is extracted and potential environmental risks.

For example, there are naturally occurring radioactive materials trapped in the shale, and volatile organic compounds released during gas extraction and production.

Readers who have never been on a drill site will get an up-close-and-personal introduction to the technology of shale gas extraction.

First, the authors settle the debate on just how “old” fracking is. It’s been done for decades. But the modern advancement that led to the current boom came after traditional hydraulic fracturing was combined with horizontal drilling in the late 1990s in the Barnett Shale. That showed how previously untapped reserves could be reached and extracted.

After providing a literary tour of well pad construction and drilling rigs, the authors talk water. More than 20 million people get their water from areas potentially affected by Marcellus gas development, so this is a hot issue in the drill zone.

One point they emphasize is that not all water withdrawals have equal impact on watersheds and the environment. Just as important is the question of how to dispose of drilling waste fluids, which contain heavy metals, radioactive materials, volatile organic compounds, and dissolved solids.

There are solid waste issues, too. Cuttings not buried correctly can impact soil and groundwater, as well as wildlife.

Fracturing the shale also creates the potential for human-induced earthquakes. A few earthquakes have been documented as a result of injecting fluids into a well during drilling.

But injecting fluid into disposal wells has caused a lot of seismic activity, including earthquake “swarms” of a thousand or more quakes over short periods of time.

One chapter is devoted to a life-cycle analysis of drilling and the impacts of gas extraction on climate change.

The question isn’t whether gas is “better” than coal. It is whether changing to gas will reduce climate change enough to offset the increased risk of water and air pollution to the people living near wells, compressor stations, pipelines and other infrastructure.

It doesn’t matter whether you are writing about Marcellus shale – or the Bakken, Haynesville, Fayetteville or Barnett deposits – this book is useful. It does a great job explaining the basic science.

Sue Smith-Heavenrich writes about science and environmental issues from atop the Marcellus Shale in upstate New York.