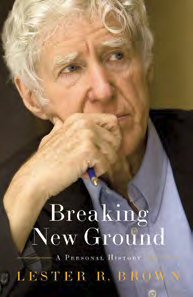 Praised by the Washington Post as “one of the world’s most influential thinkers,” Lester Brown has had a rags-to-riches life in environmental activism – a rare feat, especially because activism is hardly a lucrative field.

Brown’s story is an intriguing one, in part because of his humble New Jersey farming roots.

He came from a family in which nobody else even graduated from elementary school. He went on to create the Earth Policy and Worldwatch institutes and write or co-author 51 books. Some have been translated into as many as 42 languages.

Brown has won numerous awards, including a MacArthur Fellowship, the 1987 United Nations Environment Prize, and the 1994 Blue Planet Prize, the latter for his “exceptional contributions to solving global environmental problems.” He has received 25 honorary degrees. Renowned figures such as Ted Turner, David Suzuki, Edward O. Wilson and Carl Safina are among his fans.

Much of his enormous success has come from Worldwatch’s annual “State of the World” books and a 1995 book, “Who Will Feed China?” which has been credited for bettering China’s agricultural policy.

His travels abroad to India early in his career were highly influential in developing his view of the world from an agricultural-environmental standpoint.

Brown said he has made a commitment to living comfortably, not lavishly, rechanneling millions of dollars he has earned and raised into efforts to improve the planet, not to simply pad his personal bank account.

He gives us a taste of his eccentric, if not slightly obsessive, personality by saying how the denim-colored blue shirts he likes have become such a trademark he is no longer interested in dressing in other colors or styles.

He doesn’t own a car. He lives in a one-bedroom condo and jogs in addition to his walking. For 25 years, he played touch football on Saturdays between Memorial Day and Labor Day.

The tone of his book wavers between being too self-congratulatory at times and incredibly down to Earth at others. It’s a good read for the most part, especially the beginning when he writes about growing up in the 1930s and the hard life he scrabbled out while his father was a sharecropper. He lived in a home with no running water, no electricity, no indoor plumbing and no refrigerator.

Brown showed keen entrepreneurial skills at an early age: He launched a tomato-growing operation with his younger brother that by 1958 was producing more than 1.5 million tomatoes.

While working toward an agricultural science degree at Rutgers University and later employed by the U.S. Department of Agriculture, he developed a vision of sustainability – what it would take to feed the world as its population continued to swell.

That ag component of his life, coupled with his intense passion for the environment, opens a new window – or at least a much wider one – for environmental writers seeking the convergence between agriculture and natural systems.

Brown is a great resource, not only for his writings on how food supplies can be strained by population growth – but also how water can be, too, and how climate change affects both.

“The yardstick by which I judge myself,” he writes near the end of his autobiography, “is not in terms of how many books I’ve written, though that has been rewarding, or how many talks I’ve given, much as I’ve enjoyed them, but rather whether we are reversing the trends that are undermining our future.”

Tom Henry is The (Toledo) Blade’s environmental writer, SEJournal’s book editor, a member of the magazine’s editorial board, and a former member of SEJ’s board of directors.