Donald Trump’s election as president is likely to mean big upsets in U.S. environmental and energy policy. What will happen if and when he turns his campaign rhetoric into presidential action?

Some of his promises would likely be moderated by legal barriers and political considerations. For instance, during a primary debate in March, he said he would largely abolish the “Department of Environmental Protection” (we think he meant EPA). But legal experts quickly pointed out that that would be impossible without Congressional action to repeal most environmental laws. And EPA still has some supporters in Congress. So such a move would take time, if it happened at all. Even so, his naming of climate-denier Myron Ebell to oversee the EPA transition suggests the agency may have a target on its back. 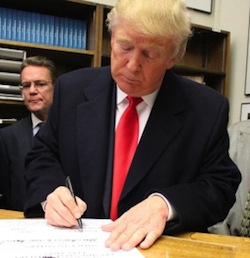 Also, both Clinton and Trump campaigned with promises of building “infrastructure” (e.g. water pipes or bridges) to create jobs. Obama sought infrastructure, too, but Congress was reluctant to pay for it. Trump has not detailed how he would pay for it either. A big omnibus infrastructure bill is something Congressional Democrats and Republicans could — theoretically — agree on. Yet this, too, could take a long time.

But there is a lot Trump can do with his own executive power — or things that need no legislative heavy lifting.

SEJournal Online has prepared a watchlist for environmental journalists looking for stories that may become more important now that we’re past the election and entering a lame-duck period, or during early days of the Trump administration. Most have broad geographic impact. Most can yield news at regional, state and local level as soon as this month. And most entail actions the president could take without Congress.
Here is our list of 12 stories, beginning with energy issues, where the rubber (of a Trump administration) will meet the road (of actual real environmental and energy governance).
1. Federal Coal Leasing

A review of coal leasing on federal lands must be finalized — and plans set for future lease sales. The Obama administration’s Bureau of Land Management expects to complete a draft by December 2016 — but finalization will be left to Trump. If Trump ends the moratorium and boosts sales, that will have implications in western states, coal-mining states, and coal-burning states. All-out leasing may impact company balance sheets more than actual jobs.

The BLM has just finished an overhaul of rules for oil and gas leasing on federal lands to measure production accurately for royalties and to protect aquifers from fracking. But drillers — and Trump and surrogates — have called for rolling back regulations to allow go-go drilling. Fracking rules are an example of what Trump might change with executive power, whether on National Park Service or BLM lands, or in the Arctic National Wildlife Refuge.

The Deepwater Horizon well that blew out in the Gulf of Mexico in 2010 is an example of what can go wrong with offshore drilling. Some offshore lease sales are less controversial (e.g., in shallow Gulf waters). Others are very controversial (e.g., in Arctic waters or off Florida). The current five-year plan allows no drilling off the Atlantic coast. Watch for future revisions under Trump.

Trump's seeming knee-jerk antagonism to renewables may be hurtfully simplistic. Places like Texas love wind — lots of it — and are busy making money from it. Renewables costs are falling so low that they may prosper and grow without government intervention. The question (as seen in 2016 ballot initiatives) is whether government should intervene to prevent their success, as the utility industry sometimes urges. Will feds keep encouraging renewables with funding and tax breaks? There are many local stories.

What will happen to the "Bipartisan Energy Bill" (see S. 2012 and H.R. 8) still pending in Congress? It includes removal of regulatory barriers to energy development and “infrastructure” like pipelines — things Trump and a lot of other Republicans say they want.  Will the Senate and House versions (which are quite different) be reconciled before the lame-duck session ends? Would Obama sign it? Would Trump? It's full of regional goodies like liquid natural gas export terminals.

What will happen to the multiple oil/gas pipelines currently being built or objected to? The Dakota Access Pipe Line is just one newsy example. Obama agencies have partly stalled the DAPL — but Trump could give it a green light. He actually owns a stake in it. Trump could also bring back the Keystone XL Pipeline that Obama killed. The many pending pipelines have impacts across wide geographic areas. Will Trump greenlight them all?

The EPA’s Clean Power Plan is the Obama administration’s regulatory blueprint for reducing greenhouse emissions from old and new coal-electric plants. It is currently in court. Trump has promised to tear it up. Changing or abandoning the plan by rulemaking or litigation could not happen with a stroke of a pen — it would take years. In many places, fuel transitions that will reduce CO2 emissions are already under way without it.

Court cases on various Clean Air Act controversies such as the ozone standards are still being contested. There are others, such as the mercury rule. How will the new administration play them out? Will it just roll over and withdraw or settle? Ozone is an example of an issue that will have fallout in many airsheds, since failure to meet the standards can hurt airsheds economically.

This epic ongoing battle over what waters are subject to the Clean Water Act wetlands protection provisions has already gone before the Supreme Court, but the legal issues are not all settled. Ecosystem advocates want wetlands protected, but developers and farmers say permits are a burden. States are lined up on both sides. Will Trump withdraw the rule or settle the case? Whatever happens will have big regional and local impacts.

Environmental sciences have been controversial since "Silent Spring." Yet when scientific consensus is reached, however slowly, progress has been made in protecting people or species. Current environmental health science wars rage over chemicals such as the herbicides glyphosate and atrazine, and there have been allegations of industry putting its thumb on the science scale. Will an "anti-science" Trump administration intervene in science integrity? Most of these science stories have regional impacts.

Everybody talks about “infrastructure” as a path to jobs — and Congress has a nearly-done infrastructure bill it could finish during the lame-duck session.The Water Resources Development Act is awaiting reconciliation of versions already passed by the House (H.R. 5303) and Senate (S. 2848). Congress thought it had a deal when it recessed for the election, a deal including money to help protect against lead-contaminated drinking water in Flint, Mich.. Will politics intervene or will Congress finish it? Will Obama sign it? Will it be left to the next Congress and Trump? This includes many projects in many states.

Though his views are fuzzy, Trump seems sympathetic with the public lands movement embodied by the Bundys case. Obama has some opportunities to protect land with his Antiquities Act monuments authority in the remainder of his administration. These include Gold Butte, Nev., adjacent to the Bundy Ranch. How will this play out in the lame-duck and the Trump administrations?

Here’s more from Trump’s official energy plan. And do you know of other stories where a Trump administration could act under executive power on environment and energy matters? Tell us about them by sharing your tips with SEJournal Online. Email us at sejournaleditor@sej.org.