“Hot, Hungry Planet: The Fight to Stop a Global Food Crisis in the Face of Climate Change”

“Hot, Hungry Planet: The Fight to Stop a Global Food Crisis in the Face of Climate Change”

In “Hot, Hungry Planet: The Fight to Stop a Global Food Crisis in the Face of Climate Change,” freelance journalist and SEJ member Lisa Palmer tackles a question many experts in the natural and social sciences are also pondering: How can we feed a growing world population in the coming decades when climate change is stressing global food production systems?

As Palmer notes up front, this isn’t just an environmental question. It also involves social, economic, legal, health and infrastructure ideas, or levers, as she calls them. 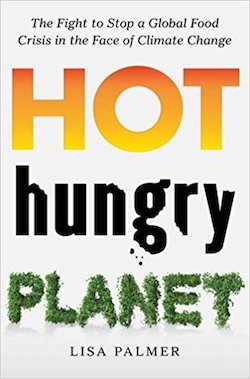 First, a rising middle class in the developing world is demanding more meat and dairy products.

Second, deforestation and mass production of animal products and palm oil is degrading the environment and fueling climate change.

Third, and more hopefully, there is great potential to reduce poverty, which mainly affects the world’s rural poor — the people who produce much of the global food supply.

The heart of the book is a tour of bright spots in Africa, Latin America and elsewhere that illustrate how multi-pronged social and environmental strategies can improve the food system.

These include programs to educate girls in rural Uganda and programs to promote sustainable cattle ranching strategies in South America.

Other strategies help small-scale farmers in India shift to “climate-smart” methods that are water- and resource-efficient and closely attuned to weather and climate patterns.

There’s also a chapter that spotlights the flaws of large-scale monoculture, focusing on deforestation in the developing world, which Palmer describes as “climate stupid.”

In contrast to the eco-friendly systems she’s already described, an industrial soybean farm in Paraguay feels anything but natural, she observes. And that’s not just an aesthetic issue: Eventually, a valuable carbon sink will be lost.

For the most part, though, this is a solutions-oriented book that ends on an upnote with a sustainable pork farm in Iowa that supplies meat producer Niman Ranch.

Palmer predicts that “by the time the century reaches its midpoint, it is likely that we will expect all food to be produced sustainably. … As a growing planet constantly seeking to thrive, we will live with and adapt to the massive transformations that climate change will bring.”

There’s room to debate that view, especially with the Trump administration pursuing policies that many critics call climate stupid.

The big question I was left with at the end of “Hot, Hungry Planet” was how quickly the smart ideas that Palmer spotlights can grab momentum away from large-scale monoculture and force that ponderous system to change.

But that’s fodder for another book.

Jennifer Weeks is environment and energy editor at The Conversation U.S., based in Boston, and is a former SEJ board member.