The coming year will be “make or break” for critical decisions on a range of environmental and energy issues, agreed leading journalists at a Jan. 25 event co-hosted by the Society of Environmental Journalists and the Wilson Center’s Environmental Change and Security Program.

Climate change is just “one of many priorities” at an agency with “limited resources,” said Wehrum, who when asked by Holden about whether EPA was clear on the science of climate change, responded “I’m still trying to figure that out … I’ll admit there’s a lot I don’t understand about climate change.”

Wehrum acknowledged he had not read all of the recent National Climate Assessment, which when released last November offered stark warnings of the consequences of climate change for the United States.

And while the Guardian’s Holden wanted to talk about climate, Wehrum seemed more eager to discuss the Mercury and Air Toxics Standard, or MATS, a rule which though almost fully implemented, is being targeted for changes by the EPA.

About EPA’s effort to revoke part of the justification for the MATS rule, as well as climate change and other things, Wehrum maintained there had been “misunderstanding, and, to a degree, misreporting.”

During the weeks before the Wilson Center event, SEJournal published a sweeping “2019 Journalists’ Guide to Energy & Environment” as an online special report. SEJ board member Jeff Burnside delivered an overview of what the year ahead offered, summarizing the guide.

‘I believe in a hundred years,

journalists will be talking about

Burnside, a former SEJ president, spoke to the expansion of environmental coverage into many new areas of news coverage — this past year partly the result of extreme weather disasters — and said the group functions as a virtual newsroom for building better journalism, especially through its annual conference, this year to be held in Fort Collins, Colo. in early Oct.

“I believe in a hundred years, journalists will be talking about the work we’re doing right now,” Burnside said, adding that he expects 2019, like 2018, to be another year of “holy cow!”

Burnside said that the 2019 guide forsees coverage expanding over climate change and the “Green New Deal.” The number of congressional oversight hearings will increase, while court cases will intensify and debate over rules on coal ash and the Clean Water Act will be contentious.

The guide also predicts the rollback of auto emissions standards will remain an issue for coverage, and that the renewables revolution will continue, as will squalls over science, while headlines will be garnered by issues of environmental justice and toxic PFAS in water. The issue of plastic in the environment will be front and center, Burnside added.

Moderator Holden later queried a panel of five top journalists about stories and issues in the year ahead.

Juliet Eilperin, who has covered Congress, the White House and the environmental beat for the Washington Post, said the start of 2019 was a “pivotal moment” for the Trump Interior Department, as the White House needs to decide who would permanently replace Ryan Zinke as secretary. Zinke resigned in December amid scandals. Nonetheless, she said, Interior would forge ahead with the Trump administration’s policies.

Key among them, she said, was “energy dominance” — by which President Donald Trump means maximum possible energy production from federal lands and waters. She cited the huge acreage offered for lease last year in Alaska (with few takers) as evidence, along with the opening up of national monuments. The Trump Interior’s “full steam ahead” approach to leasing even during the government shutdown was, she said, a harbinger of what was to come.

‘Love it or hate it, the EPA is

in the middle of one of the most radical

course corrections in its history.’

Eric Lipton, a crack New York Times investigative reporter who has specialized in the environment, told the forum: “Love it or hate it, the EPA is in the middle of one of the most radical course corrections in its history.”

He added: “The first two years of the Trump administration’s tenure has actually been an incredibly sloppy two years. [Acting EPA Administrator Andrew] Wheeler has already shown that he’s a much more disciplined, rigorous leader, and that he’s going about things in a more careful, constructive … way.”

Citing the Trump EPA’s efforts to replace the Obama Clean Power Plan, and to rewrite the Waters of the U.S. rule, the CAFE standard for auto fuel efficiency and the methane rule, Lipton said: “It’s make or break time. If they’re going to actually have a legacy, this is the year when they have to make that legacy come real. … This is the year when they’ve got to remake the rules.”

Courts are where conflicts will be decided, predicts panelist

Ellen Gilmer, who edits and reports environmental court cases for the E&E News fleet of newsletters, said she has been busy over the past two years, as almost all of Trump’s environmental rule rollbacks have been challenged in court. That, in fact, is where most of the conflicts will be decided.

“There’s a lot pending where we won’t see the resolution of the litigation by the time the administration is through, that’s for sure,” Gilmer said. “I wouldn’t expect the offshore drilling plan, the clean cars, the ACE rule,... whatever they end up doing on mercury. … those things aren’t going to get to court and be resolved [soon].”

Pradnya “PJ” Joshi, an editor covering agriculture and trade for Politico, said that climate change would certainly be affecting the agriculture beat as things go forward. She pointed to the way that Hurricane Harvey had impacted Texas cotton, suggesting that ongoing climate change would bring more extreme weather events with impact on that scale.

to getting anything done [on climate legislation],

given Republican control of the Senate

and Trump in the White House.’

Another example cited buy Joshi was Hurricane Florence’s impact on hog farms and waste lagoons in the Carolinas. The coming year, she said, would bring stories about efforts by companies like Smithfield to cover and reconfigure their waste lagoons.

Christina Larson, who has covered science, technology and the environment from a perch in Asia for the Associated Press and other outlets, said China’s energy demands would continue to grow as more of its population is expected to move to cities in years ahead.

Larson suggested China might in fact succeed in reducing its air emissions as promised under the Paris Agreement. That’s been a point of some uncertainty, but she said China was strongly motivated, not simply for purposes of climate, but to reduce the choking air pollution plaguing many of its cities.

Asked by the audience whether panelists saw any likelihood of climate legislation in the coming year, given the expectations pumped up by the “Green New Deal,” Eilperin said it was not yet clear that voters’ intensity of feeling about climate was enough to spark action. “There’s clearly no immediate path to getting anything done, given Republican control of the Senate and Trump in the White House.”

The two-hour event was capped by a reception supported by The Wilderness Society, The Nature Conservancy and Environment America.

View of slideshow of photos from the event below and watch a webcast of the full event here or below. Visit the full “2019 Journalist’s Guide to Energy & Environment.” 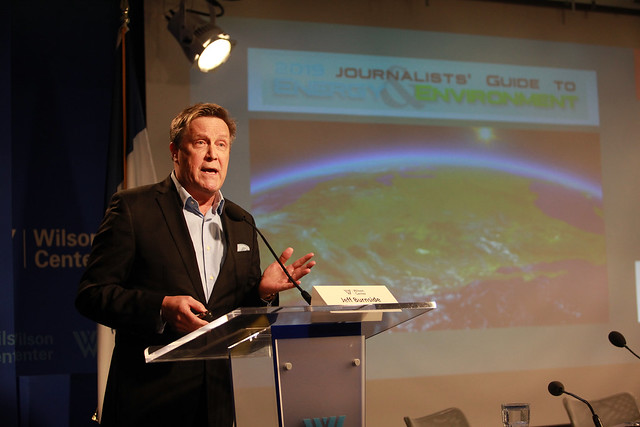